Over 400 quilts made by quilters from across Canada were on display, including the National Juried Show in Art, Miniature, Modern, and Traditional categories.  The event featured workshops, lectures, a merchant mall, and daily demos.

Trend-Tex Challenge 2016 entries were on display and included wallhangings made by Seymour Quilters’ Guild members, Yoskyl and Marilyn. 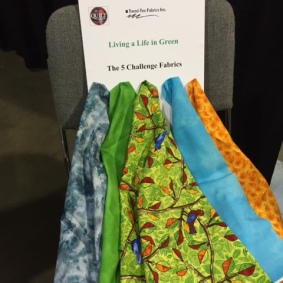 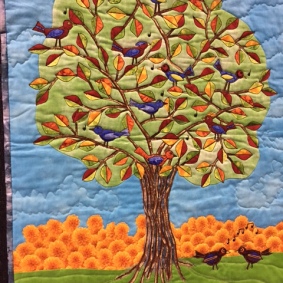 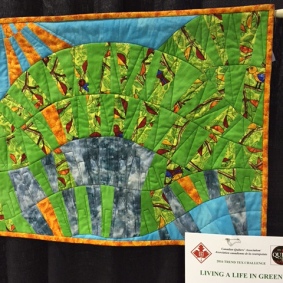 One of the quilts on display was featured on the cover of the Spring 2016 issue of The Canadian Quilter magazine.  It is called “Algonquin” and was made by Joni Newman.

Jenifer noted that many quilters who had entered quilts in the show were in attendance.  She enjoyed talking to them and learning more about their quilts and the stories behind them.  Jenifer said that her friend, Marg, who attended the show with her, was inspired by what she saw to start quilting.

Click on any image to open a carousel of Jenifer’s photos. 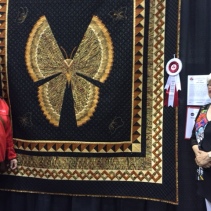 Orange Grove by Krista Hennebury of North Vancouver, BC and Krista Withers … “new life into a traditional Pine Tree block.” 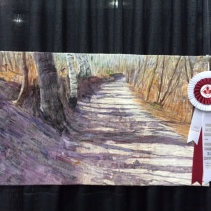 The River Valley Beckons by Birdie McLean, Edmonton, Alberta … “How can you explain you need to know the trees are still there? … So you walk.” 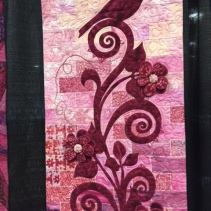 Fond of Outings, Quilting, Flowers and Cats by Naoko Hirano of Japan … “The key to enjoying life on on’s own is being motivated and having a drawer full of curiosity.” 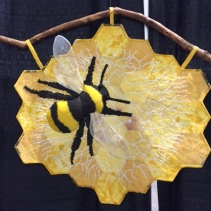 Rauga Bee by Debra Plestid of Tatamagouche, Nova Scotia … “Bee: symbol of the soul; messenger to the divine, with its ability to fly between the worlds of heaven and earth … “

San Miguel Doll Maker by Jenny Perry of Lac Le Jeune, BC … from “a photograph of a dollmaker selling her dolls” in Mexico.

From the World to Canada by Anita Payne, Perth, Ontario. Made of clothing labels with place names “to represent the global origins of people and products that came to Canada.”

Seaton Trail by Helen Garland of Toronto, Ontario … “based on a photograph … the Seaton hiking trail in Pickering, Ontario.” 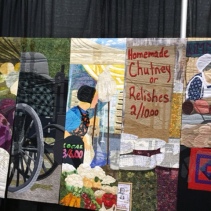 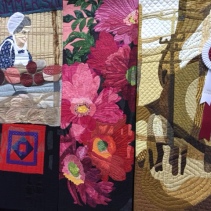 Adagietto by Jean Hillis of Ingersoll, Ontario … music interpreted in a quilt. 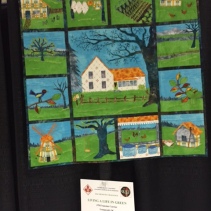 To see the winners of the 2016 National Juried Show at Quilt Canada 2016, click here.

To see the winners and all the quilts entered in the Trend-Tex Quilters Challenge 2016, click here.

Seymour Quilters Guild is a member of the Canadian Quilters Association.